I recently bought an iPad Pro, in part, to help me go paperless at work. I'd been contemplating upgrading my iPad for a while, but I’d been putting off the expense as they aren’t exactly cheap.

Now that I've been running with this setup for a few months I wanted to share my thoughts. Some of the benefits were obvious and intended, but some were unexpected, in particular I’ve found the iPad to be a really useful remote working tool. And I ended up getting an Apple Pencil after I had a consistent, repeatable need for one.

I should clarify early on that I'm not an Apple fanboy. I have owned iPhones over the years and a previous generation iPad. I've also used a MacBook Pro for work, but that was given to me by my then employer. As it stands the only Apple device I own is this iPad Pro.

Back in 2014 I bought a first generation iPad Air. I've used it on and off over the last 6 years, mostly for browsing the internet and watching videos.

Recently I'd been getting quite frustrated with the iPad Air as loading up an app would always take several seconds. This sounds like a first-world problem, but one of the nice things about a modern tablet or phone is being able to multitask efficiently and switch from one app to another with ease.

I happen to use 1Password for managing all of my personal passwords between my various devices, and we even use 1Password at work. As all of my passwords are long and randomly generated by 1Password, entering passwords on the iPad Air was a painful experience as it doesn't support FaceID or TouchID, so I'd have to type out my master password each time using the onscreen keyboard This was another compelling reason to consider an upgrade.

Another big motivation for considering a new iPad was that I wanted to move away from paper-based notes, I wasn't sure if this was going to work as writing is a very cathartic exercise – but I was prepared to give it a try.

So a couple of months ago I bit the bullet and got myself a new iPad Pro 11" with the Apple Smart Keyboard Folio.

I opted for the keyboard from the start as I wanted to use the iPad for emails and notes in meetings. Whilst I could have achieved this with an on-screen keyboard (and in fact my older iPad), it's fair to say that I'm more proficient with a physical keyboard.
So far, I've not been disappointed with my choice.

I opted for the keyboard from the start as I wanted to use the iPad for emails and notes in meetings. Whilst I could have achieved this with an on-screen keyboard (and in fact my older iPad), it's fair to say that I'm more proficient with a physical keyboard.
So far, I've not been disappointed with my choice.

There are some fairly obvious choices for apps that you'll want, such as access to email, calendar, etc. At work we use a lot of GSuite, so for me this means having Gmail, Google Calendar, Google Drive and Google Meet installed.

I don’t think it’s possible to be as productive as you can be on Docs and Mail without a physical keyboard. When I had the iPad Air, I found I was using it as a read-only device. On the Air editing and writing emails was a chore that was faster accomplished on the laptop.

A physical keyboard is a must-have for the iPad if you plan to use it for a lot of document editing and emailing.

Before I got the keyboard I was concerned that it would either be:

The keys are smaller than a normal keyboard, which is to be expected given the form factor of an iPad, the keys are also sensibly spaced. Like with any other keyboard I found myself adjusting to the key size and spacing within a few days.

The Folio Keyboard is definitely sturdy. It uses some fairly strong magnets to hold the iPad in place. It doesn’t matter if you’re using the iPad at a desk or on your lap while you’re watching TV, it’s sturdy and in many regards feels just like using a laptop.

As someone who spends most of their time working on Linux, I've gotten used to the fact that conferencing on Linux is a questionable experience at best, given that most of the working world is powered by Microsoft or Apple.

I find that joining a conference call from an iPad can be really useful as I've not yet come across a conferencing tool I've needed to use that doesn't have an iPad app. It's also a much better experience than joining from a phone, especially if someone wants to screen share – you can read a desktop screen on an iPad, you certainly can't on a small phone screen.

I often find myself having to sign and send back documents over email. As a Linux user this is more of a problem for me than most, as there aren't a lot of options for signing documents under Linux. I often found myself having to reboot into Windows to get tasks like this done.

Instead, I'll now load up the PDF in Adobe Acrobat Reader on the iPad to get it signed.

Staying Connected Whilst on the Move

The iPad with a Keyboard is also a great form factor for when you're out and about and have some spare time between things. Productivity on a phone is often limited and sometimes you're not somewhere long enough to want to fire up your laptop. The iPad (especially with the keyboard) is a good compromise between the two.

Don't forget that not all communication happens over email. If you use a messaging client make sure to have it installed.

The entire world is gripped by Coronavirus right now, and for me, like many people, this means ditching the office and working from home.

I've worked from home before, and our team is used to remote working so for the most part this has been a smooth process. However, whenever I've done remote working, one thing I've always missed about being in an office is the ease at which you can go over to a whiteboard with someone and start scribbling out a technical diagram or drawing out a workflow to explain a concept.

Over the last few weeks I'd find myself using the iPad as a whiteboard substitute, as I'd join a call with a colleague from the iPad, share the iPad screen and then use the native notes app to scribble using my finger.

If we gloss over the fact that me trying to draw on an iPad is mostly illegible, it worked very well as a tactic. It's worked well enough to the point where I've invested in a copy of GoodNotes 5 and an Apple Pencil.

GoodNotes is a really well thought out note taking app, and I also use it for more typical note taking when I want that cathartic kick that comes from writing.

Sharing notes with GoodNotes is incredibly easy, I can share individual or multiple pages really easily as images or PDFs. When I’m on a call, I’ll often be asked for a picture of whatever diagram we’re scribbling on, and I can usually share this within a few seconds while we’re on the call. This has happened enough times now that I feel the approach of an iPad as a whiteboard substitute has been well and truly validated.

Whilst the Apple Pencil hasn't done anything for improving my handwriting, it has allowed me to be much more dexterous when drawing diagrams compared to using a finger.

I've been using the setup for a good few months and I find the iPad to be a great lightweight alternative for a laptop. I often get the iPad out to be productive in time gaps which wouldn't necessarily warrant firing up the laptop and I’ve found that I can be as productive on the iPad (with a keyboard) as I can be on the laptop.

The Apple Pencil took me by surprise, I thought it would be a gimmick and after a while I’d stop using it - that hasn’t been the case.

I was surprised by how useful I’ve found the Apple Pencil. It’s worked well as a whiteboard alternative. I’ve ditched paper notes for written notes on the iPad.

I even use the Pencil to draft up diagrams and send them off to clients or colleagues for peer review. It’s as fast as doing it on paper, and it is certainly faster than trying to protype something in Google Docs using the shapes, lines and arrows that make up the drawing tools.

I’m very pleased with my iPad setup and the productivity that I’m getting from it. I’ve even started doing a few bits of programming from the iPad, but that’s a topic for another blog post. 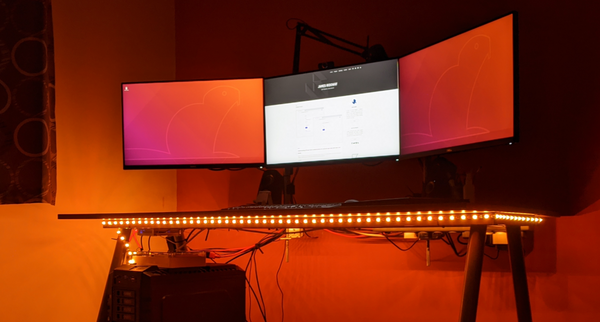 In a previous blog post I put together a step-by-step guide on how to put together the hardware for a Raspberry Pi controlled LED strip. In this post I will

I recently bought a new iPad to help me be more productive at work. It didn't take long for me to start wondering if you can use an iPad for