Building and configuring an immutable server image from the ground up using SaltStack and Packer.

In this post, I will show you how I have taken my existing traditional SaltStack configuration management setup a step further to build fully configured server images automatically. This post will focus on how to apply SaltStack and Packer to an Immutable Server concept, for a detailed introduction to these tools I will defer you to their respective documentation.

Just under a year ago I decided to over-engineer my projects and put my server setups into SaltStack. I like experimenting with technology, which sometimes involves migrating VMs from one provider to another.

It reached a point back in May 2017 where I decided that this process shouldn't be the manual slog that it was, and with that decision made I put my personal projects into SaltStack. Since doing this, I've managed to leverage the following benefits:

If you don't already have a standard server setup defined in a config management tool, this should be your starting point.

My SaltStack configuration covers the following areas at a minimum:

I'll let you pick the configuration tool that best suites your needs. I would recommend a tool that allows you to apply configuration locally without needing to connect to a master. This will be important when we use Packer to build machine images.

Packer allows you to fully automate the build process for a machine image by taking a base image (such as Ubuntu 18.04 server) and then building any custom setup on top of that.

Immutable Servers and containers are both technologies that are designed for ephemeral environments. If you're familiar with a container technology like Docker, you're probably used to the concept of layering container images. With Immutable Servers, the same layering technique can be applied. Layered VM images will allow you to maximise on re-use and utility.

If we sketch this out visually, my VM images can be split into the following layers. Note that the below diagram also shows how the VM images of the actual applications fit in (the specifics of which will follow in another blog post). 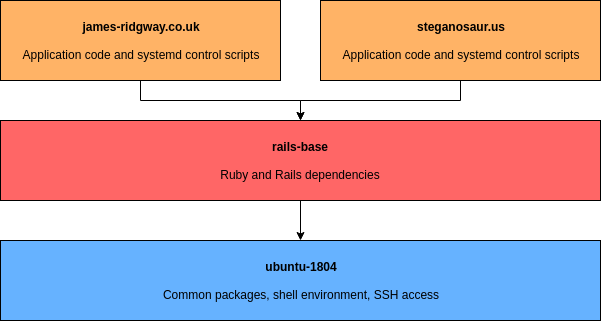 With this in mind I structured my VM images as follows (remember that in my context most of my projects are Rails applications):

I have a vm-images repository that contains all of my core VM images that can be built with packer. Each VM image is designed for a specific purpose.

The vm-image repository is structured as follows:

rails-base and ubuntu-1804 directories both house a packer JSON template file which contains the steps for the builders and provisioners.

The salt folder is a git submodule of my pre-existing SaltStack repository.

I also have a single build.sh build script which is designed to build all of the VM images in the repository.

One of the nice benefits of layering VM images is that if I want to experiment with building a rails app quickly, or I want to spin up a new VM, I can do so using my preferred rails setup (rails-base) or my preferred Ubuntu setup (ubuntu-1804).

My ubuntu-1804 image is my base image for everything else, with this I use a file provisioner to ensure that the salt directory is copied to ~/salt on the VM image:

After the file provisioner I use a shell provisioner to run an init.sh which is used to install and bootstrap salt:

That's the entire process for building my ubuntu-1804 base image. From here I could run the following to build the image:

However, before I do this I want to ensure that I can tell exactly what code has contributed to which version of a VM image.

I often find a way to bake version control information (e.g. the git commit hash) into the software that I build. This gives an unambiguous view of precisely what code goes into each build.

Most of my images are designed to run in AWS only and therefore only have an AWS provisioner. You can track the commit hash of your image through an AWS tag.

I've added the Commit tag with a value of unknown

Using a build script written in bash I have jq replace the unknown value with commit hash before building the images:

Note: packer-versioned.json is ignored in my .gitignore file.

When I look in the AWS console, I can easily see which AMI was built with which code by looking at the AMI tags. 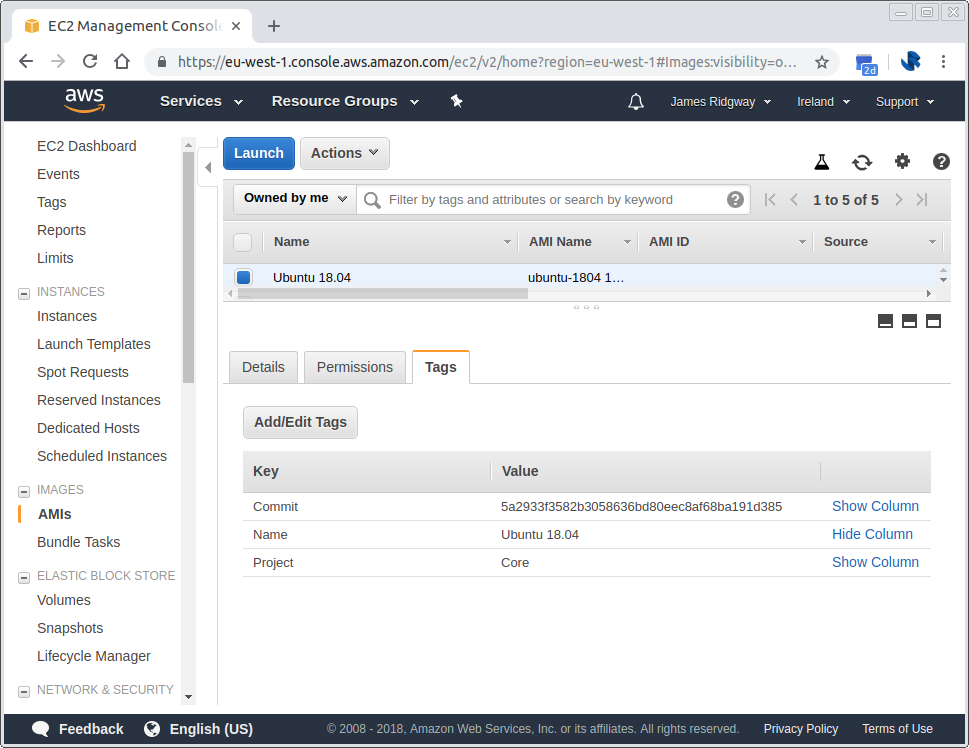 There are numerous ways that you can specify variables for Packer. In my case, I decided to use jq to modify the template file. Other solutions include:

Getting the Latest Source AMI

My packer build process always automatically pulls in the latest source AMI using a most_recent filter. Using this filter allows you to easily propagate changes without having to version-bump the source AMI referenced in your packer build files:

Building Images on top of Your Base Image

Building my ubuntu-1804 base image is a simple process of applying Salt state. The process of building my rails-base image, or any other image is fairly simple. For any image, I typically rely on SaltStack for the configuration.

For my rails-base image, I use my ubuntu-1804 as the base image. I use the same style packer template file too, the init.sh script is subtly different. In this version, I make sure to set the hostname and the minion ID.

I set the minion ID before locally applying the salt state to ensure that salt state for minions matching rails-base-* is applied. This will install all the dependencies and requirements that are needed to run a rails application based on what I have defined in my Salt configuration.

This approach of using Packer to automate the building of my AMI images has allowed me to re-use my existing SaltStack configuration and wrap a packer build process around this that can build all of my core server images from the ground up in a fully repeatable and version controlled process.

For a talk that I did at Sheffield DevOps, I prepared a set of example projects that illustrate the concepts I have discussed in this article:

Nearly two years ago I built a short URL generator that used AWS Lambda, API Gateway, S3 and CloudFront. It costs pence to run and it was a good excuse

Using Packer, systemd and deployment script to build a Rails application into an AMI and launch it into production as a Spot Instance - saving up to 90% of the

Explore how to use Application Load Balancers and Target Groups to build core infrastructure for deploying immutable web applications. This post is the next installment in the series on Immutable